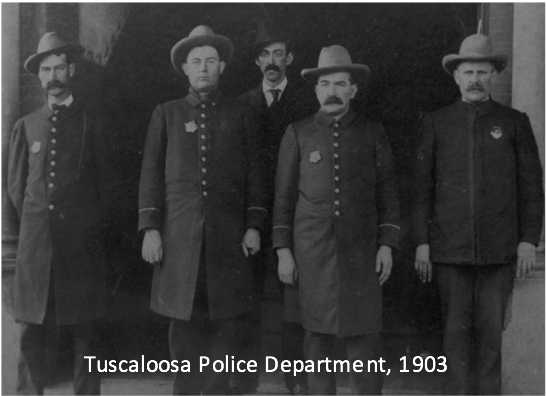 In 1836 the first step toward creating a separate Tuscaloosa Police Department occurred when the town marshal position was created. Originally an elected position, it became an appointed position over the next several years and was swapped about informally with some years with no marshal on record, either due to lack of funding or lack of necessity.

In 1838 the marshal got some assistance through a City Ordinance to establish the town patrol. It required all persons living in the City of Tuscaloosa to register with the town marshal for the purpose of serving on the town patrol. The mayor would select six names from the list to serve each week and the selected citizens would have to patrol for four nights during that week.

The marshal’s duties were expanded to include street repair and ringing the town bell each night at 9 p.m. Marshals were paid $430 quarterly for their duties.

Due to the ineffectiveness of the town patrol, another city ordinance was passed in 1843 establishing the city guards, which consisted of two paid patrol officers. They earned $15 a month to patrol at night, and it augmented the town patrol.

The position was paid although still appointed monthly. For paying the mayor $2, you could be excused from serving as a city guard for a year.

The Tuscaloosa Police Department was established in 1896 when Mayor William Jemison changed Town Marshal Anthony Gill’s title to Chief of Police and hired three full-time officers who were permitted to wear uniforms. Records show that in 1900 the Tuscaloosa Police Department consisted of Chief of Police Anthony Gill and officers H.F. Burks, J.A. Ryan and A.L. Christian. The town of Tuscaloosa had grown to over 5,000 residents.

With Tuscaloosa growing in size, the newly formed Tuscaloosa Police Department had to grow and change with the needs of this growing city. In 1910 TPD established a mounted patrol. In 1917 a Ford was purchased for TPD for $390.30, becoming our first patrol car. The first motorcycle was added in 1920. TPD officers were paid $60 per month and were each given a house phone at the City’s expense. The Chief of Police was paid $75 a month. 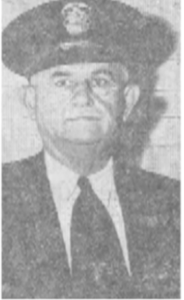 The budget for the department in 1931 was $26,687. Many advancements were made during Chief H.D. Billingsley’s tenure. Among the most notable advancements was the construction of a city jail.

The first TPD Communications Division was established, improving how calls were handled.

The first radio system for the department was added in 1934. It would only transmit one way. During this period an officer would have to find a phone and call HQ if an arrest was made. One officer had the habit of handcuffing the prisoner to a telephone pole and calling HQ to tell them where the patrol car could pick the prisoner up. In 1945 the radio system was upgraded to allow for two-way transmissions.

The first traffic light was installed at 15th St. and Hackberry Lane in 1945. It was followed with the first parking meter in 1947. A total of 750 meters were installed.

A Detective Bureau was established, which later became the Criminal Investigation Division. Chief Billingsley also took advantage of federal training and networking and sent the Captain of Detectives to the FBI National Academy (FBINA) to train. Since that time numerous command staff members have attended and graduated from the FBINA, including Chief Steve Anderson as well as three other current command staff members.

Officer training at TPD became of utmost importance in the late 1950s, and that trend continues today. 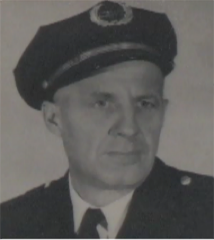 Chief W.C. Tompkins stressed public service, and he introduced many traditional courtesy details that are still performed today by TPD, such as funeral escorts and school crossing guards. (TPD discontinued funeral escorts after the accidental death of Officer Trevor Phillips in 2011.) 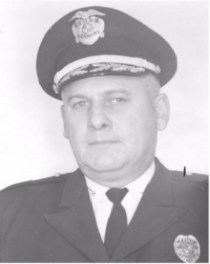 Chief W.M. "Bill" Marable took over in 1962, when events such as the Vietnam war, Civil Rights efforts and anti-war protests made policing in the 1960s especially challenging. Chief Marable helped secure the first polygraph machine for TPD and the training of a certified operator for it.

Chief Marable designed the TPD patch that is still worn on the uniform to this day and standardized the look of patrol cars. He replaced the badges previously worn with high-quality badges and updated the uniforms to a more modern look for the time, complete with Air Force-style hats that are still being issued.

The Air Support to Routine Operations (ASTRO) Division was created in 1971, when TPD purchased a Bell helicopter for air observation. TPD established the Narcotics Division in 1972. It would later evolve into a regional task force and is now known as the West Alabama Narcotics Task Force. 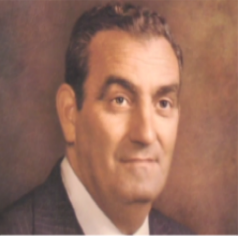 An avid flyer, Chief Winston Morris expanded the role, size and responsibility of the Air unit. He also created the Crime Prevention Division, which is still in service today.

Chief Morris also began a police liaison program within local middle and high schools to help curtail juvenile delinquency and to increase the safety on campus for students and faculty. That program has evolved into today's TPD School Resource Officers (SRO) program. 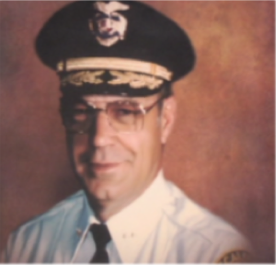 Chief Jerry Fuller worked to get funding for the new police department, which was completed after his resignation. He also helped lay the groundwork for the Police Athletic League. 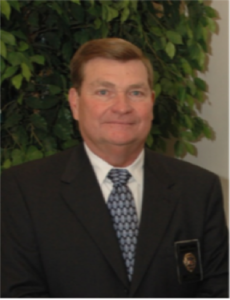 Chief Ken Swindle was the longest serving police chief at TPD since Chief Billingsley. Chief Swindle gained national attention as an assistant chief for his handling of the hostage crisis at the West End Christian School in 1988. The suspect, James Harvey, took captive nearly 60 people, mostly children, inside the school. Chief Swindle orchestrated a videotape in which Alabama Governor Guy Hunt said on camera that Harvey would be granted a pardon and immunity. However, the promise was considered to have been written under duress, and it thus carried no legal weight — it was a ruse to get him to surrender. After giving up his weapons, two pistols and a rifle, to authorities and preparing to lead the child hostages outside for what he believed would be a news conference, Harvey was wrestled to the ground by Chief Swindle and arrested.

Under Chief Swindle, the new police headquarters was finished, and a host of programs and innovations were started.

The PAL Program was fully implemented by Chief Swindle and became an important asset in the war against juvenile delinquency. Chief Swindle tackled the issues of gaps in law enforcement technology and pay/benefits for officers and worked with the mayor and council on getting grants and increases in pay for the officers.

Chief Swindle helped establish the Neighborhood Watch program through TPD, and he helped create and support Crime Stoppers. Later in Chief Swindle’s career, the first Mobile Data Units (MDUs) were purchased and installed in the patrol units. MDUs allow officers to see pending calls, search subjects and perform other type of database searches while in the field. 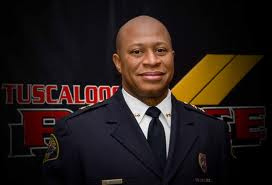 Chief Steven Anderson was the first minority police chief in Tuscaloosa's history. Trying to fill the shoes of the long serving and popular Chief Swindle would have been daunting for anyone, but Chief Anderson didn’t waste any time in making his mark in TPD history. Some of his accomplishments to date, among others, include:

In keeping with the core values of Mayor Walt Maddox regarding transparency, Chief Anderson had the department publish its first Annual Report in early 2017, making it accessible to the public through a variety of channels. The Annual Report is a review of criminal statistics and TPD's accomplishments for the most recent year.